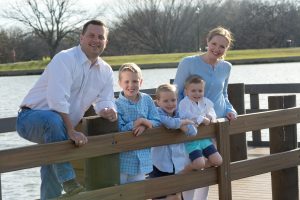 A native Texan, Roger Fisher was born in Lubbock before his family ultimately established roots in the mid cities when he was just six years old.  No stranger to hard work, Roger was raised by two parents who instilled in him at an early age the values of honesty and diligence in everything he pursued.  Those same values they taught him at a young age are the same values that still drive him at work, at home, and in his commitment to community.

After attending Trinity High School, Roger went on to receive his degree from Texas A&M University (Gig ’em) in 2003.

At a young age, Roger demonstrated a strong work ethic and natural leadership abilities.  Always an entrepreneur, Roger started his first business – a successful landscaping company – while still in school, and kept it going through his Junior year of college.  After graduating, he went on to work at First Horizon Home Loans before he ultimately joined his father at Qualtex Inc.  After working under his father for 15 years, Roger went on to purchase Qualtex and now serves as the President and CEO.

Since 2009, Roger has proudly served his community on the Bedford City Council.  In his time in office, he’s helped shepherd the purchase of Bedford Commons land, voted against new multi-family development in Bedford, helped satisfy all debt in the street maintenance fund, ensuring all new street projects are paid for with cash, and worked toward transparent and accountable budgets.

Roger is married to his 8th grade sweetheart, Shannon, and they have three young sons.  They attend Gateway Church.